My stepfather died a little more than a month ago. When going through some old family photos, I came across one of my favorite — a picture of him and my mother decked out to attend the Royal Ascot. While the UK is home to some of the most prestigious horse racing events in the world, notably the Cheltenham Festival and the Grand National, the Royal Ascot is horse racing royalty. While I wasn’t in England when they attended the races, I remember my mother’s excitement at being invited and the pleasure she took in planning her outfit.

The Royal Ascot is steeped in history. The first meet took place in 1768, at Ascot Racecourse, which was founded in 1711 by Queen Anne who developed a taste for horse racing and commanded that a course be laid out over the common at Ascot. She then announced a challenge plate that was worth 100 guineas — worth nearly $18,000 in today’s money.

“Her Majesty’s Plate of 100 guineas will be run for round the new heath on Ascot Common, near Windsor, on Tuesday, the 7th August next, by any horse, mare, or gelding, being no more than six years old the grass before, as just be certified under the hand of the breeder, carrying 12 stone, three heats, to be entered the last day of July, at Mr. Hancock’s, at Fern Hill, hear the Starting Post.”

The first four-day Royal Meeting took place in 1768 but Royal Ascot week as it now exists, started to take shape with the introduction of the Gold Cup in 1807, when the roots of today’s Royal Enclosure dress code first emerged.

Regency dandy Beau Brummell, a close friend of the Prince Regent, decreed that men of elegance should wear waisted black coats and white cravats with pantaloons. Over the years, this evolved into the wearing of morning suits for men and equally formal clothes for ladies, who must still wear hats in the Royal Enclosure. — 300  Years of Royal Ascot 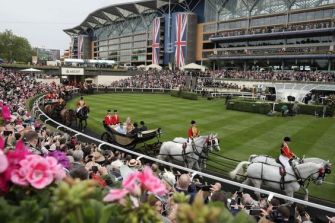 It has since served as an event celebrating the very best in British traditions, fashion, royalty, and sport, with members of the British royal family setting the tone. Each day of the five-day festival is opened by a royal procession, with Queen Elizabeth II and her family driven in horse-drawn carriages down the race track and into the parade ring often joined by the world’s rich and famous.

Unsurprisingly, strict dress codes remain. A Town & Country feature on the festival explains what to wear in the Royal Enclosure, the Queen Anne

Enclosure, and the Village Enclosure. The Windsor Enclosure, meanwhile, has no dress code, and has more relaxed rules.

The highlight of the Royal Ascot is still the horse racing. Every June, there are 30 races spread over five days, ranging from grade races (1 to 3), handicap events, and listed competitions. Several of the most famous races in England — and the most historically significant — are run during the June meet.

The Queen Anne and King’s Stand Stakes is run on the opening Tuesday. This race has an interesting history because while it’s now one of the most important sprints at the meet, it didn’t exist until 1860, when heavy rains made it impossible to run the Royal Stand Plate over its usual distance of two miles. They raced, instead, over the only five furlongs of the track that were dry enough and named it the Queen’s Stand Plate; it became the King’s Stand Stakes after the death of Queen Victoria and the accession of King Edward the VII in 1901.

The Royal Hunt Cup was established in 1843. This sprint over 7 furlongs is now run on a straight track and typically draws a very large field.

The Gold Cup, held on Thursday, is England’s most prestigious race for “stayers”, horses that run long distances and is run over a 2 mile, 3 furlong course. The race was first run 1807. The 1844 running was attended by Emperor Nicholas I of Russia. That year’s winner was unnamed at the time of his victory, but he was given the name “The Emperor” in honour of the visiting monarch. In return Nicholas offered a new trophy for the race — the “Emperor’s Plate” — and this became the title of the event for the next nine years, after which its  original name was restored.

The King Edward VII Stakes, held on Friday, was first run in 1834, as the Ascot Derby. Although it is now restricted to colts and geldings, originally it wwas also open to fillies. The race was renamed in memory of King Edward VII in 1926.

The Queen Alexandria Stakes, held on the last day of the meet was established in 1864 and was originally called the Alexandra Plate. It was given its current name in 1931. This is the longest flat race in England, run over 2 miles, 5 furlongs and 143 yards. This race sometimes features horses that ran in the Ascot Stakes, on opening day. The last horse to win both races in the same year was Simenon in 2012.

But as with any multiday festival the Royal Ascot has its own crown jewel. bwin Horse Racing explains how the Diamond Jubilee is the feature event at the Royal Ascot. It is a 6-furlong Group 1 flat horse race contested on Ascot’s final day. The event was established in 1868, and it was originally called the All-Aged Stakes. It was renamed the Cork and Orrery Stakes in 1926, in honour of the 9th Earl of Cork, who served as the Master of the Buckhounds in the 19th century.The race was renamed to commemorate the Golden Jubilee of Queen Elizabeth II in 2002.  In 2012 the race was given its current name, Diamond Jubilee Stakes to commemorate the Diamond Jubilee of Queen Elizabeth II.

This year, it was won by Blue Point, trained by Charlie Appleby and ridden by James Doyle. BBC Sports reports that Blue Point completed a rare Royal Ascot double, as it also won the King’s Stand Stakes days earlier. Two days later, the colt retired from racing. Charles Appleby said, “To do what he did within five days was the pinnacle of his career and he couldn’t have done any more. He retires fit and well to Dalham Hall… we don’t think he has anything else to prove.”

The Diamond Jubilee win gave Doyle three victories at this year’s Royal Ascot. But that haul was not enough to give him top rider honors, which went to Frankie Dettori. The Italian jockey tied his Royal Ascot record of seven victories, which he set in 1996 all in one day.

The exploits of both Doyle and Dettori are now part of Royal Ascot lore. Theirs likely won’t be the last. Building on its 300-history, this prestigious 5-day festival is sure to continue for a very long time. It is, after all, an event for royalty, and an indelible part of British horse racing culture.

3 thoughts on “The pageantry of Royal Ascot”

This site uses Akismet to reduce spam. Learn how your comment data is processed.